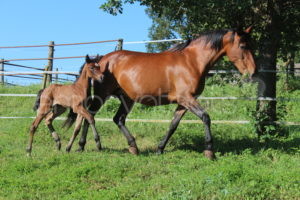 • The first horse conceived as a result of a combination of ovum pick up (OPU) and intracytoplasmic sperm injection (ICSI), two in vitro fertilisation techniques which enhance fertility and enable the genetic preservation of elite animals, has just been born in Catalonia.
• This birth points to the future of equine assisted reproduction in Spain. It has been made possible by a project carried out entirely in the country led by the Embryotools centre based in the Barcelona Science Park in partnership with CREA Veterinaris and Embriones Equino.
• ICSI was developed in 1992 to treat men with fertility problems and is now a routine procedure in human assisted reproduction laboratories. Nonetheless, in horses there are very few laboratories (around five worldwide) that have achieved successful results.
• In 2009, the Embryotools team successfully cloned the first animals in Spain, while in 2012 the centre’s scientists were the first in Europe to achieve the birth of healthy horses after embryonic sex selection.

Barcelona, 2 June 2020. The Spanish Embryotools centre, which is based in the Barcelona Science Park (Parc Científic de Barcelona, PCB) and a pioneer in human and animal assisted reproduction, and CREA Veterinaris, which has over 25 years of experience in equine assisted reproduction, have achieved this first birth in Spain by combining ovum pick up (OPU) and intracytoplasmic sperm injection (ICSI). The foal was born on a farm in Viladrau, northern Catalonia, in the early hours of 22 May after 11 months of normal gestation.
This birth is a milestone in the future of equine assisted reproduction in Spain. It was made possible by a collaboration project between Embryotools and CREA Veterinaris in Taradell (Barcelona) along with the Seville-based firm Embriones Equinos, a leading provider of brood mares.
“ICSI first emerged in 1992 for treating men with fertility problems and is now a routine procedure in human assisted reproduction laboratories. Nonetheless, in horses there are still very few laboratories (around five worldwide) that have achieved successful results. Due to the specificity of the equine oocyte, we have had to modify the procedure and use a sperm microinjection system with a Piezo system in order to achieve better results while also adapting the in vitro culture system,” says Dr Gloria Calderón, Director of Embryotools.
The process posed other problems specific to the equine species. “The first is that the mares do not respond to superovulation treatments, so we cannot get several mature ova. The second is that ultrasound-guided retrieval of ova by OPU is not easy. Although the mare copes with this procedure very well, it calls for experienced veterinarians and a good deal of training,” points out Dr Guillem Formiguera, co-director of CREA Veterinaris.
“The ova were obtained at CREA Veterinaris’ reproduction centre in Viladrau in northern Catalonia. They were then sent to our laboratory where they were matured in vitro and fertilised by means of Piezo-ICSI. The resulting embryos were cultured for eight days and sent back to the farm to be transferred to the recipient mothers,” adds Dr Nuno Costa-Borges, Scientific Director at Embryotools.

A new era of assisted reproduction in horses

One of the great advantages of the OPU-ICSI technique is that only one sperm per ovum is needed. By contrast, in conventional insemination several million spermatozoa are required for one of them to get through the barriers of the ovum, penetrate it and generate an embryo.
Most mares have their reproductive cycle during the spring and summer (the breeding season) in the months of greatest light, and few are reproductively active during the winter. So as Dr Sara Valls, co-director of CREA Veterinaris, notes: “With this technique, reproductive cycles can be extended to times when mares do not habitually cycle and vitrified embryos can be saved for transfer at a later date, as is done with embryos resulting from in vivo insemination programmes.”
This technique also allows embryos to be obtained from mares with fertility problems, and instead of one embryo per cycle, up to five can be obtained per mare every 14 days. “Although we get a high level of efficiency with the transfer programme with embryos generated by in vivo insemination, we saw that with this technique we could get embryos from stallions or mares with fertility problems which we could not do with traditional methods. So we teamed up with Embryotools to deliver this service. ICSI is so efficient at present that it can even be used to produce healthy female embryos, thus maximising the use of semen,” says Dr Formiguera.
The method enhances genetic quality in stud farms because it makes it possible to get foals from the best mares while also avoiding gestation fatigue of mares taking part in equestrian competitions. The technique can be used with any equine breed. However, it will be most sought after by breeders of high genetic value horses who will now be able to use it in Spain and will no longer have to go abroad. This IVF procedure also has great potential in terms of improvement programmes for Spanish purebred horses and elite animals. These techniques are currently in use with demand growing year after year for breeding sports horses in Europe and, albeit to a lesser extent but also rising, for other types of breeds such as the Arabian purebred and quarter horse. Scientists think that this technique also has the potential to recover other wild or endangered species.